Tips for Dealing With Insurance After A DUI 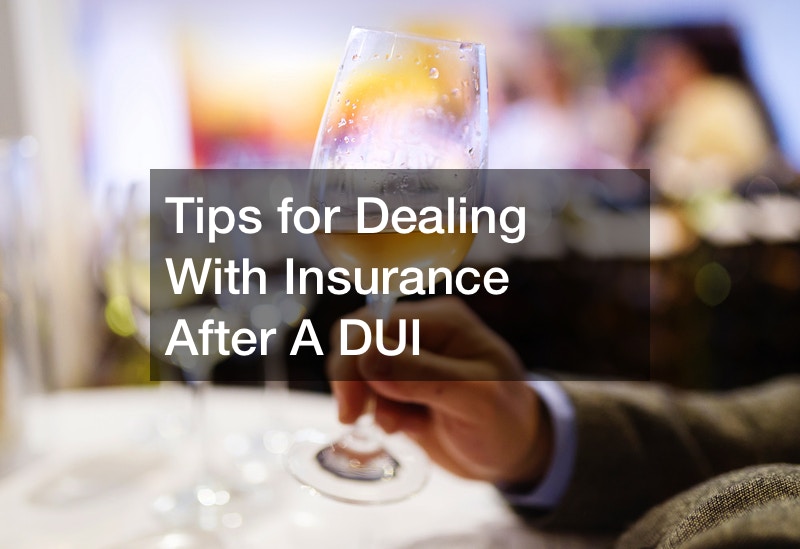 “It will never happen to me!” This is what many people think when it comes to a DUI. However, you are changing your fate after having a few drinks and getting behind the wheel. Each time you do so, you are stacking the odds of getting caught against you. This article is going to give you the answers and tips for dealing with insurance after a DUI. It is about how to get the best insurance quotes for DUI drivers.

What Happens When You Get Arrested for DUI

Every state in the U.S. has laws against driving under the influence. Yet, approximately one-third of those states have completely banned driving with any foreign substance present in the bloodstream. It does not matter whether this foreign substance created an impairment in driving ability or not. Just having it present in the body can because bailbond a charge of driving under the influence.

If you are pulled over for suspicion of driving under the influence, the office will perform a field sobriety test. This test aids in determining how impaired your driving skills are. You will be given a series of dexterity tests as well as a breathalyzer to determine BAC (blood alcohol content). If you refuse these tests, you run the risk of immediate license suspension.

Bail and the DUI Process

If you are arrested for DUI, the court will usually assign a bail amount for your release until the set court date. This is done after you have been booked into police custody. You are normally allowed one phone call after the booking process is completed. The bailbond is determined by the following circumstances:

Once a bail bond has been set, you will be required to contact a bail bondsman service for assistance.

What is SR-22 Insurance?

SR-22 insurance is a form an insurance company files when you commit a serious traffic violation. When arrested for a DUI you must comply with SR-22 requirements. This is needed to have your registration and driver’s license reinstated. When seeking insurance quotes for DUI drivers you need an insurer willing to file an SR-22 form on your behalf.

Driving Under the Influence (DUI) vs Driving While Impaired (DWI)–What is the Difference?

These two terms are not differentiated by federal laws because there is no clear definition of these two offenses. Different states have contrasting disciplinary actions for these two similar, yet disparate offenses. The following are descriptions about what each of these offenses involves:

Driving Under the Influence (DUI)

Getting behind the wheel after having one too many alcoholic drinks could damage your vehicle in other ways. You might put pressure on the engine and not hear the sounds of the crankshaft grinding. This action could result in serious engine damage that insurance might not cover due to impaired driving.

After being charged with an offense as serious as driving while impaired, you will likely need a new insurance company. You will most likely need to call around and get several insurance quotes for DUI drivers. Other types of insurance, such as RV insurance, may require proof you completed an alcohol rehab course. Some RV dealers might do a check on your driving record to ensure you don’t have a DWI history before selling to you.

Another type of insurance you might want to check out is pre need counseling services. This service is meant to aid with planning for unexpected occurrences, such as funeral arrangements. When you purchase a pre-need insurance plan, the pre-need counseling will help pre-plan funerals.

A live floor vehicle operator or live floor trailer leasing doesn’t allow DUI or DWI convictions within 5 years. If you have been convicted of these it will be hard (if not impossible) to get insurance quotes for DUI drivers.

This type of utility is a semi-trailer that is utilized for the hauling of materials that are loose. These materials can be grain, potatoes, gravel, sand, or asphalt. There is a conveyer belt on the bottom of this trailer that operates it. The belt pushes material at a controlled pace out of the trailer. Owning one of these trailers requires insurance quotes for DUI drivers. This protects you in the event you hire employees who might have a prior conviction.

In the U.S. driving under the influence of alcohol is a serious offense. 30 people die (one every 48 minutes) in an accident related to drunk driving. For this reason, obtaining insurance quotes for DUI drivers can be difficult with this on your record. Many insurance companies will want you to show proof of participation in addiction services and some form of alcohol rehab.

Patients with a substance abuse disorder often require palliative care. This type of care offers a person suffering from a long-term illness or condition specialized medical treatment. Palliative care is a team of medical professionals working together to ensure a person receives additional support services.

What Happens if My Car is Impounded?

Following a DWI/DUI arrest the officer who arrests you may call a towing company to have your vehicle impounded. There are several steps that must be taken to get your vehicle out of impound. If a person is unable to pay the impound fee, the car might be sold to cars for cash.

These are steps to take to avoid your car being sold to cars for cash. The steps include:

Following your providing vehicle ownership, payment of DUI and other fees, you need to get an authorization release form. Do not allow 30 days to elapse following receipt of this authorization. If this happens and the vehicle is not redeemed, legal procedures will begin for the sale of your vehicle.

What If I Want to Enlist in the Military Following a DUI Arrest?

Any recruiting service you inquire about enlisting in the military following a DUI arrest will tell you no. Although, you are not officially allowed to enlist in any branch of the military certain circumstances may allow it.

The following are reasons why the military doesn’t want a recruit with a DUI conviction:

Unless there is a signed waiver the U.S. Military is unable to hire a recruit with a DUI record.

When it comes to the U.S. Military a conviction counts as a DUI if the following apply:

If the following holds true, your DUI conviction will not be held against you:

Getting in the military following a DUI can be as difficult as it is to get insurance quotes for DUI drivers. However, it is not impossible.

The need for military personnel, following the Gulf War and Middle East post 9/11 created the necessity for waivers. These waivers make it much more lenient to get accepted for military enlistment.

Although programs such as “Reduction in Force” (RIF) have lowered this military need, many waivers are being denied.

Yet, you can still have a waiver if your DUI meets the following requirements:

Every case is different, your best bet is, to be honest with your recruiting services personnel about the DUI. Just as when you are getting insurance quotes for DUI drivers. When you are open and upfront, something can usually be worked out to your advantage.

Things to Avoid Doing If You Get a DUI

Getting arrested for any reason can be extremely stressful. Add to that the reason for driving under the influence, and you have doubled or tripled the stress. Besides making it difficult to get insurance quotes for DUI drivers, some employers might terminate their employees’ employment.

Getting a DUI conviction can have penalties that go way beyond the courtroom. They can haunt you and alter the rest of your life. Therefore, it is imperative you avoid doing anything that is going to make things worse.

The first thing you should do is to find an attorney that is experienced with DUI law. The right legal counsel will make all the difference in getting you the resolution to this case you are seeking.

The following are things to avoid if you get pulled over for an assumed DUI:

While you never expected this could happen to you, and it has, it doesn’t have to be life-damaging. Although things will be tough, like getting insurance quotes for DUI drivers things will get better. Just follow the legal advice of your attorney and best of all, avoid drinking and driving in the future!